Experience the African Diaspora with thought provoking, visually-oriented lectures perfect for Black History month and throughout the year.

Dr. Jackson holds a Ph.D. in Visual Anthropology from Union Institute and an MFA and BFA from Yale University. He is founder and president of Olaleye Communications, Inc., of Boston, MA. Hes serves as a consultant to artists and scholars who are conducting visual and cultural research related to Africa retentions in the Americas.

Dr. Jackson is available for a number of thought-provoking visually-oriented lectures on:

Invite Reginald to your school, organization, or institution for an inspiring visual presentation that can be accompanied by a photographic exhibition and curriculum. 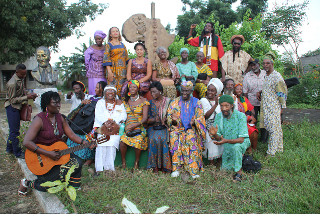 Some Diasporan participants at Recordia Festival

The festival is intended to contribute to a culture of peace and coexistence of peoples on African soil, according to the general coordinator of the festival, Mr. Gilbert Goudjo. “The festival seeks to draw the attention of the international community and Beninese leaders to this historic city, which, though it was the point of departure of more slaves than Goree Island (Senegal), is totally forgotten.”

“The primary objective of the Recordia festival is not only to make a culture of peace, to promote indigenous African values as a lever for community development, and to ennoble the image of Africa, but also to put into action a strategy of uniting the communities of Benin, Africa, and the historical African diaspora elsewhere in the world, especially those who came from Benin,” he explained.

“To put it another way, the objective is the promote indigenous African values and to use cultural promotion as a tool for community development, as was initiated in the World Fesitval of Arts and Cultue Vodun or “Ouidah 92”. “It is also a question of launching a resolute crusade against the bad image of Africa which is used to devaluate us in order to better exploit us.” he declared.

During the RECORDIA Festival, there are plans to organize several events, including Community Days with representatives of communities and their Diaspora, an International Day of Brotherhood and Friendship between Africans and other peoples, and a trade and artistic fair.” 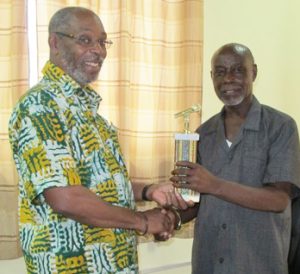 Prof. Jackson delivers broadcast journalism award for most innovative programming in the U.S. shared by Simmons College’s Department of Communications to President Kwaku Armah of African University College of Communications in Accra, Ghana. 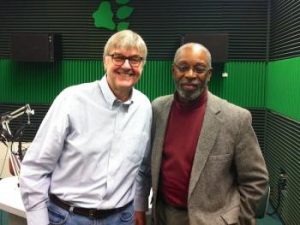 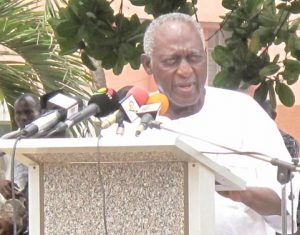 Kofi Awoonor, May he rest in perfect peace 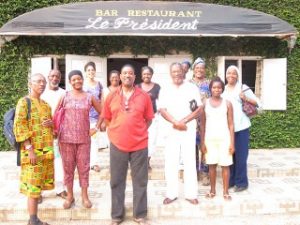 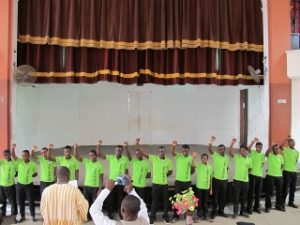 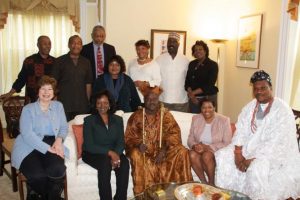 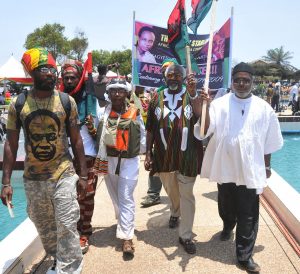 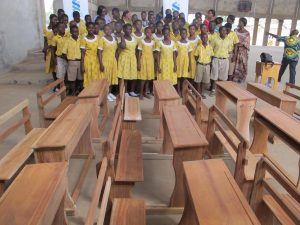 “The last great initiative of Martin Luther King, Jr. and the Southern Christian Leadership Conference, the Poor People’s Campaign attempted to broaden the civil rights movement to include economic justice for disadvantaged people of all races. Conceived in November 1967, it began after King’s assassination in April 1968. The centerpiece of the campaign was mass civil disobedience in Washington by an army of protesters including National Welfare Rights Organization members, and in mid-May they set up an encampment on the Mall dubbed “Resurrection City.”

The project was created by The Veterans Benefit Clearinghouse Inc. and the Ramsay Memorial Site Committee. It was constructed under the aegis of Mayor Thomas M. Mennino, City of Boston, in 2002. It was funded by the Henderson Foundation and The Boston City Trust. 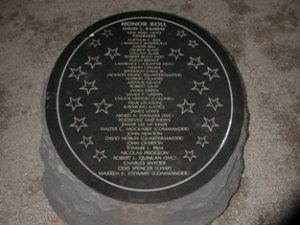 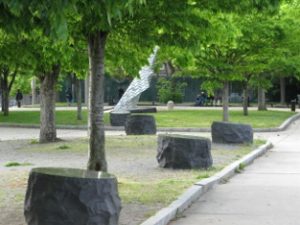 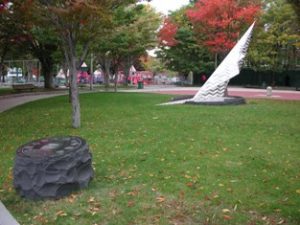 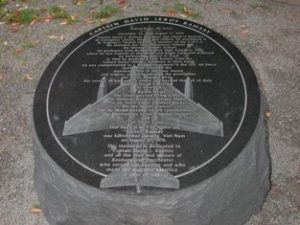 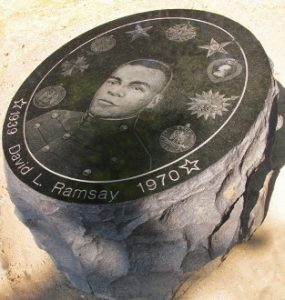 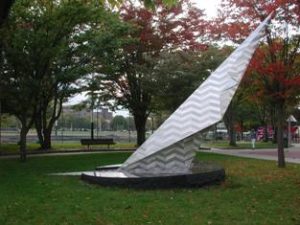 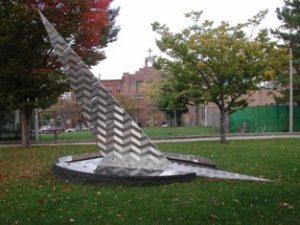 The Airfoil created by sculptor Valerie Maynard stands almost 17’ tall is made of 3/4” stainless steel and sits on a 10’ in diameter Zimbabwean black granite base with a red granite inlay. The 5 black granite tablets that lead up to the Airfoil are 30” in diameter and are etched depicting the story of David L. Ramsay and other veterans from the area.

These murals were first created in 1970 in consultation with the Community Advisory Board of the African American Institute at Northeastern University, Stull and Lee and Olaleye Communications, Inc.

In 2007 the restoration of Mame Jato, the 8ft. x 12 ft. photomural mounted on a wooden platform was encased in a acrylic envelope to reduce exposure to the elements. Additionally a new digital image of “Watching”, 37 ft x 18 ft. , was created to embrace the entryway of the new home of the Institute. 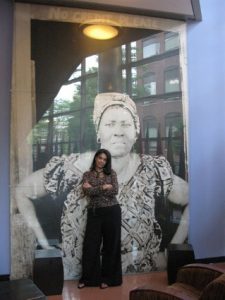 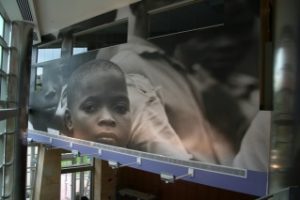 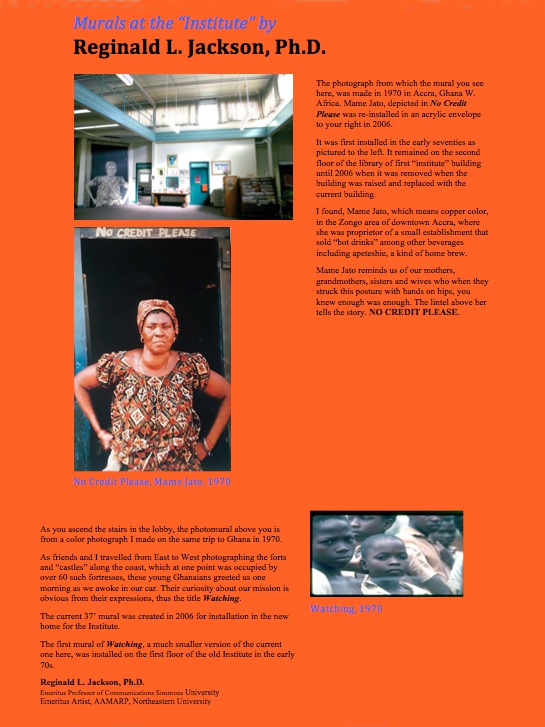 Out of the initial convening of Martin Luther King Day Dialogues in Episcopal parishes and with community-based groups from across the country, this introductory promotional video was produced. It addresses the Episcopal Diocese’s need and commitment to work against racism.

This tool is used to promote convening Dialogues. Approximately 20 minutes in lenght, it includes images and news footage of actual events and segments with the XXVth Presiding Bishop, Frank T. Griswold, III as well as other national church leadership. 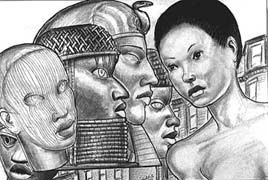 This 45 minute tape depicts techniques employed to help prepare individuals to facilitate Dialogues using a manuscript resource. This video is used to train individuals to become more familiar with the manuscript’s methodology. It includes segments of actual trainings, pre-and post briefings and actual Dialogue footage of what “works” and “what does not”. This tool is useful in the planning and preparation of Dialogues.