“The last great initiative of Martin Luther King, Jr. and the Southern Christian Leadership Conference, the Poor People’s Campaign attempted to broaden the civil rights movement to include economic justice for disadvantaged people of all races. Conceived in November 1967, it began after King’s assassination in April 1968. The centerpiece of the campaign was mass civil disobedience in Washington by an army of protesters including National Welfare Rights Organization members, and in mid-May they set up an encampment on the Mall dubbed “Resurrection City.” 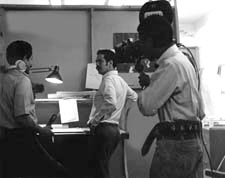 A youth oriented architectural and educational video, utilizing vintage footage from the 60’s at Yale University’s school of Art and Architecture

In 1968, when he was a Graphic Design graduate student at Yale University, Reginald was a founding member of a group of African-American graduate students called the Black Workshop, comprised primarily of students studying architecture and city planning. At that time, he produced and directed a 16 mm, twenty-minute, black and white film called One Way, documenting the formation of the group. The students came together to challenge the traditional curriculum at Yale. One Way dramatizes their belief that art and architecture as taught in universities was not value-free and their belief that challenging the educational establishment was necessary to force it to confront assumptions underlying the curriculum, assumptions that were too often subtly and sometimes not-so-subtly racist.

The independent design group the students formed, the Black Workshop, evolved into one of the earliest community development centers in the country. The Black Workshop Film project will provide a look at some of the members of the Black Workshop more than 40 years later. This project is in its early developmental stage and hopes to shed light on the aspirations, hopes and fears of this group once referred to as “the only group of students to have achieved so much upon graduation from Yale.”