I see my mission as a visual artist as presenting what has been seen before in new and provocative ways, while thinking about what is presented in ways not seen or thought of before. My work evolves from the mission of Olaleye Communications, Inc., which I founded in 1986 to distribute educational, visual, and cultural information pertaining to the African experience and the experiences of people of color; to be a resource base for young people and schools, institutions, educators, artists, historians, and scholars; and to implement projects and activities that bring this expanded world view of Africanisms or African Cultural Retentions to the Commonwealth and beyond. My purpose is to raise the consciousness of all people to the value of our common African heritage, and to provide specific visual images about what that heritage is while demonstrating how pervasive those images are. A manifestation of this vision has been the development of what I term Afro-Ethnographs: any visual creation that reflects traditional and contemporary African values while representing the highest standard of that medium.

Prints shown in the gallery or on the website, are available as archival pigment, iris or silver prints in black and white or color in the following sizes: 11” x 14”,16” x 20”, 20” x 30”, 24” x 36”, 30” x 40” and, as murals. Archival pigment prints are resilient to the environmental elements that commonly degrade and erode dye molecules shortening the life of a print. Iris prints are digital prints on archival watercolor paper using a method which sprays ink for an extremely color saturated, painterly look. C-prints, silver prints and cibachromes are prints on very stable substrates and are from scans of analog or digital images. All prints are signed, dated and numbered. For prices of prints exhibited or on the web site, please contact the artist. 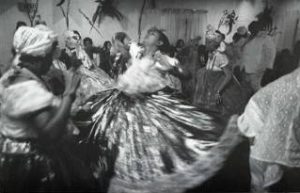 Dance of the Filha de Santo-Brazil, 1970
This piece comes from the Candomble Series in Brasil. It has been exhibited as part of the UnBroken Circle exhibition at Harvard’s David Rockefeller Center, 2002. It is in the collection at RISD where it was also exhibited. Giclee on watercolor paper similar to BFK. Less than six of these have been printed. 22” x 14.5” 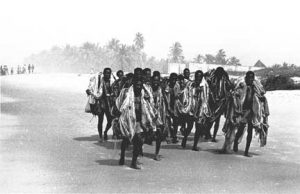 Unity, The Fisherman Series-Ghana, 1970
This piece was auctioned off at Sotheby’s in New York, and at ArtCapital in Accra in 2001 and did quite well. It is 20″ x 30″ and one of my signature pieces. It comes with 2 inch flat black wooden frame
(Giclee on watercolor paper) 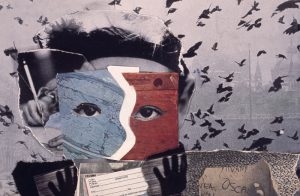 Golden Boy as Anthony Cool
This collage was done as a cover illustration for one of Herbert Cole’s books, Golden Boy as Anthony Kool. It deals with the dichotomy of the streets and school. It is a Giclee on watercolor paper. Approx 20″ x 30″. It comes with 2 inch flat black wooden frame. There is only one 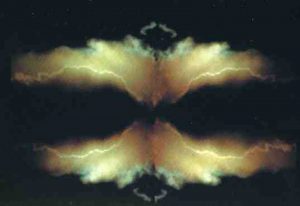 Olorun
The notion that humanity should be able to coexist with nature and other humanity is the basis of much of Yoruba thought and practice. Olorun, the Supreme being for whom no ritual is kept and believed to reside in the sky is potrayed here. 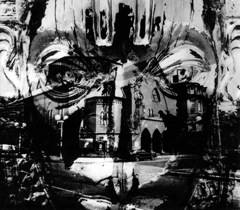 Concord Baptist Church, The Urban Ceremonial Mask Series
(approximately 20″ x 20″)
This image superimposes the Benin Ceremonial Pendant over Concord Baptist Church in Boston’s South End. It is a silver print and was used as the promotional image for the Awon Orisa solo exhibit at the MIT Museum. There is a larger color representation approx. (24″ x 24″) This piece came out of this series that is in the MIT Museum collection and was created as part of Dr. Allan Crite’s South End Walking tour series- 1976-77. B&W, the color piece framed is $ call. 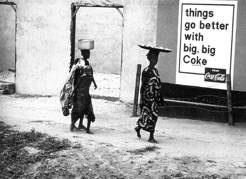 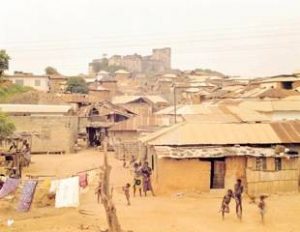 Fort Amsterdam at Abanzie, Ghana
In the permanent collection of Yale University Art Gallery is this photograph of one of over 60 slave forts along the coast of Ghana. Ft. Amsterdam is believed to be one of the forts in which most African Americans ancestors were warehoused as chattel before being transported to the Caribbean and South America. Ghana has the dubious distinction of having had a slave fort every 2.5 miles along her coastline. In 1970, I photographed all of the forts and castles remaining. In 2000, as a Fullbright scholar to Ghana, this image was made and later shown at Panafest in a large exhibition called Sighting Memory, with poetry by Kwadwo Opoku Agyemang in Palaver Hall at Cape Coast Castle.
The Tale of Two Castles, Sighting Memory Project, Cape Coast, Ghana 32″ x 24″ Iris print 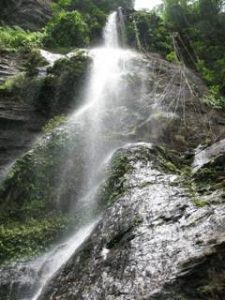 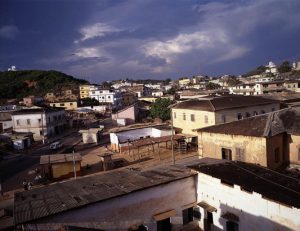 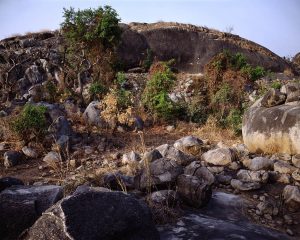 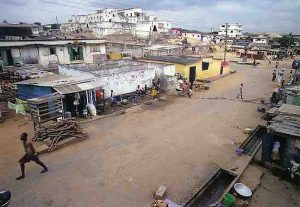 Guinea Procession
This image depicts the energy of opening day at Festac ’77 in Lagos, Nigeria. It is black and white on mural paper. 2′ x 7′ mounted on Masonite framed in chrome with plexiglass. There are only two of these.